The History of Rome – Beware the Ides of March

Beware the Ides of March – The Assassination of Julius Caesar

March 15, 44 BC (the Ides of March in the Roman calendar) was a bad day for Julius Caesar. He was murdered by a group of 40 Roman Senators (including a Senator he considered an ally, Marcus Brutus to whom as Shakespear famously wrote he said “Et tu, Brute?” (You, too, Brutus?) as Brutus approached him to stab him) as he was walking to the Roman Senate building in the Roman Forum. The place he was murdered was a meeting room in the back of a structure called Pompey’s Theater. He was later cremated in the Roman Forum after a eulogy given by his friend Marc Antony, who said “I come not to bury Caesar, but to praise him.”

He was murdered because he had recently been declared “Permanent Dictator,” thus threatening the existence of the Roman Republic. This was in response to his military victories in Gaul after which he returned to Rome and crossed the Rubicon River with his personal army – an illegal act – and declared “The die is cast” (or maybe more likely “Let the dice fly”) as he did it.

The Rubicon’s original location is now lost (a river in the Emilia Romagna region, 300+ km north of Rome was determined to be the Rubicon in 1991. This river as with many in the Po Valley, underwent a great deal of civil engineering over the centuries and so its original natural flow has been erased), but the other places – the Roman Senate building, the site where he was cremated, the site where his eulogy was given, Pompey’s Theater and the meeting room where he was assassinated – all still exist and can be visited in various ways. 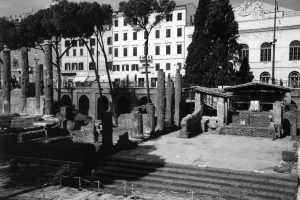 Pompey’s Theater was a permanent stone theater in Rome. Pompey was a powerful Senator who skirted the rules forbidding permanent theater structures by putting a small temple on the top and a few meeting rooms in the back and calling it a temple and convention center. It exists today south of Piazza Navona as a series of centuries old apartment buildings built upon the theater superstructure; you can follow the semi-circular curve of the building. You can also have a meal in a restaurant called Ostaria Costanza thereby sitting inside the support structure with the original brickwork and archways.

The meeting room where Julius Caesar met his demise is at the eastern end of the complex. You can see it if you visit the excavated temple complex of the Largo di Torre Argentina. The room remnants can be seen by standing in the right location on the eastern side and looking west. The area is a cat sanctuary and the room is now, believe it or not, a lavatory. In the photo above, the room in which Caesar was murdered is past the archways visible in the near background below street level. What survives of Pompey’s Theater is beyond and behind those large-ish buildings in the background.

The Roman Forum includes a rebuilt-restored Senate building and a small ruined temple room with altar that is the claimed site of his cremation. The spot where the eulogy was given is called the Rostra. The Rostra was the site for giving important speeches to the Senate building and to people gathered in the Forum’s open square. His cremation site can be seen in the photo above but just barely; locate the well-preserved Temple of Antoninus and Faustina on the far left of the photo. Follow the front stairs down to the dark gray “lump.” That lump is the ruins of the memorial and cremation platform. The Rostra is not visible but it is beyond the lower left part of the frame.

The result of Julius Caesar’s assassination was a years long civil war between Marc Antony and Caesar’s nephew Octavian. It resulted in the defeat of Marc Antony’s army and the death of Cleopatra and Marc Antony via snake bite. Octavian became Augustus and was the first emperor of the Roman Empire. He was also the guy who commanded the census that caused Joseph and a pregnant Mary to return to Bethlehem.

Wikipedia has a great explanation of the numerous calendars Romans used during the course of their time on Earth, but basically the Romans described only particular points during the month with a title. The calends was the beginning, the nones was somewhere around the 5 to 7th days and the ides was usually the 13th but in March and a few other months it was the 15th. These points are generally thought to be based on moon phases (Calends = new moon, Nones = half moon, Ides = full moon). Other days were represented by “days after calends” or days before nones.” It seems that the Romans’ calendar is, like their numbering system, a lot more complicated than it needs to be.

So, from this one incident on the Ides of March more than 2 000 years ago we get several common sayings (“Et tu, Brutus!” for betrayal, “Crossing the Rubicon” for an act that can’t be taken back) and even once in a while someone will substitute a well regarded individual’s name for Caesar in the famous eulogy. We can still visit the places at which these events occurred.